There's a letter in my family that has fascinated me for as long as I can remember. It lives among my grandad's papers, which are a disparate collection of fading photographs, scribbled notes and official documents, together with what was his pride and joy: an autograph book from his days as a music hall artist in the years before and during the First World War. My grandad Leo King was born in 1899 and died aged 56 when my dad was just nine years old. An only child, Dad had limited memories of his father and there were no aunts and uncles to tell him about Leo when he was young. 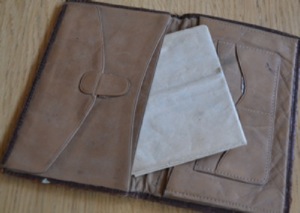 Among Leo's papers is a leather wallet with his name and address written on it, containing a single, folded document. The letter is written in pencil on two sheets of lined paper, secured with a metal staple.  The top line reads '2705 Sgt F W King RFA' with an address in France.  Frustratingly, the date is unclear. The letter begins, 'Dear Pudge'. We know it was written to Leo because there are references to his music hall career among the casual references to 'Zepps' and chat of mutual friends. It's signed 'Fred' and there's a lovely page of doodles which Fred notes as 'The result of a few minutes waste time'.  Fred evidently wrote his letter from the Western Front during the First World War. 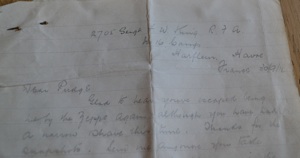 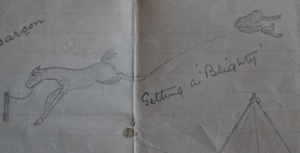 As a lifelong history fanatic I've always wanted to know more. I began tracing my family history eleven years ago when my dad became terminally ill and the lifelong mystery of his father's family became more important to him. I found Leo's family on the census each year from 1891 to 1911 but there was no sign of anyone called Fred, and I had no age or further information about him to go on. Leo's parents seem to have got away without registering the births of any of their children, something I've never managed to work out. I eventually concluded that the elusive letter-writer must have been Leo's uncle. Given that Leo's father Thomas King had been born in Ireland and I couldn't find him in any official documents before his marriage in England in the 1880s, I didn't hold out much hope of finding Fred. More frustrating, searches for various combinations of 2705 and F King in the military records on the major family history websites turned up nothing - not even a medal index card. Other than the letter, Sergeant F W King seemed to have vanished without trace.  I turned my attention to less evasive branches of the family tree, though Fred always lingered at the back of my mind.

It would be hard to escape the fact that 2014 is the centenary of the start of the First World War. I'm working on several First World War related projects and researching individuals' stories using sites like Ancestry and FindMyPast.  I was finally prompted into action by the launch of the Imperial War Museum's Lives of the First World War website, a permanent digital memorial to those who served in the conflict created through crowdsourced research. With an opportunity not just to look for Fred but to create a permanent record of his story, I decided to renew my search.

The breakthrough came when I went back to Leo's papers and found a small photograph album I hadn't paid attention to before. The dozen or so photos appear to be from the 1920s or thereabouts and document a trip to the continent. Among them is an image of a single gravestone. It's too faded to read the inscription on the headstone, but underneath someone has written a caption: 'At Bailleul sire Berthol, France'. 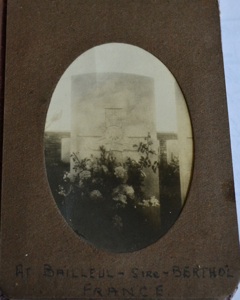 This was the lead I needed. Ten minutes later I was looking at an entry for Sergeant Fred W. King on the Commonwealth War Graves Commission web page for Albuera Cemetery at Bailleul-sire-Berthoult. The regimental number was different to that on the letter but I knew immediately that this was my Fred - his parents' names and address are familiar to me from tracing Leo's family tree, and he was born in Aldershot, the same as Leo. Fred was Leo's older brother and my dad's uncle. He served with the Royal Field Artillery and was killed in action aged 30 on 22nd April 1917.

The entry has helped me solve further mysteries. I finally found Fred on the census for 1891. He wasn't in the family home when the census was taken but was next door, with grandparents, and the census enumerater gave him the wrong surname. In 1901 he was still in his grandparents' household but is now listed as Fred King. I was also able to trace Fred's marriage to Emily Tate in 1915.  There's a hidden tragedy here as Emily had already died by the time Fred was killed less than two years after their wedding. On her marriage certificate she is listed as 'Trade Union organiser'. A lifelong union man, my dad would have loved that.

I'm gradually adding Fred's story to his entry on Lives of the First World War.  It's fantastic to be able to contribute to a national project to remember the thousands of individual lives affected by the conflict.  From the detail in Fred's CWGC entry I've been able to find the regimental diary for his unit on the National Archives website which contains a compelling, detailed description of the situation in the days leading up to his death.  I'm hoping the Air Force records will also be added to Lives of the First World War, then I can include information about Leo who left his dancing shoes behind and signed up to the newly created RAF in 1918.

According to the CWGC schedule, Fred's headstone simply reads 'Ever Remembered'. I'd like to think I've played a small part in keeping his memory alive.