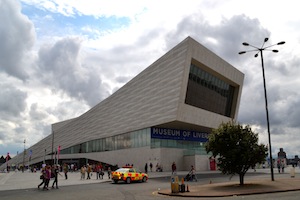 I’ll start with a confession. I've never really got on with Liverpool. I lived there for four years between 1998 and 2002 while I worked at what is now World Museum Liverpool, and despite enjoying my time there and making some great friends I never really felt at home. Something about the city's chipper-underdog image didn't gel with me and the legendary friendliness too often seemed hidden beneath a hard and unforgiving attitude. It's also true that, back then, the city and its suburbs offered a limited range of urban vistas, from shabby-chic through to unremittingly grim.

All this was pre-Capital of Culture and since 2008 the city has undergone a massive and much-needed renaissance, the impact of which is still being discussed (see the Impacts 08 website for information on the research).  The new Museum of Liverpool is a latecomer to that particular party.  It opened in July 2011 at a total cost of £72m, which (according to the NML website) makes it the UK’s biggest new-build national museum for over 100 years. With the weight of expectation that such a high-profile project entails, the museum has lot to live up to and has welcomed thousands more people than anticipated since it opened in July.

The first thing to say about the Museum of Liverpool is it's not finished yet. The ground and second floor galleries are open but the whole of the first floor and the exhibition areas it will house – Port City and City Soldiers, along with an interactive resource centre called History Detectives – has yet to be completed. The area in front of the museum is still a partial building site. The most obvious impact of this phased approach to opening is overcrowding: the museum had 13,000 visitors on its first day and the influx has hardly slowed since. That should ease with time and when the museum is fully open, but for the time being overcrowding makes for an uncomfortable visit. 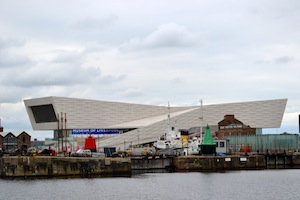 The architecture and design have had a mixed, often unkind reception, including a nomination for the Carbuncle Cup, Building Design magazine's annual award for the UK's ugliest new building constructed in the previous 12 months. Given the museum’s location in a World Heritage Site alongside the city’s legendary Three Graces one might speculate that, whatever the design, it could not have hoped to escape the critics’ brickbats. Liverpool has been under fire for several years for its management of developments along the waterfront. UNESCO has held the world heritage site under review for three years because of poor management of new developments and the museum's design took place against a backdrop of controversial decisions about new buildings in the vicinity. Its image wasn't helped by well-publicised disputes between the museum trustees and original architects. Whatever your view, it's unfortunate that the development of the UK's new national museum has been overshadowed by negativity and arguments.

The resulting building may not the most innovative design ever but it’s certainly not the most awful of the rash of new buildings that have sprung up on Liverpool’s waterfront (in my view the menacing construction built for Neptune Developments at Mann Island should take that prize). Inside the museum the public spaces are bright and welcoming, and the spiral staircase forms an impressive centerpiece. Circulation areas outside the galleries are spacious with a good supply of seating, albeit fairly ad hoc in places. The reward for making it to the top of the building is the view – the architects have made the most of the prime location and both top floor galleries offer panoramic views of the city’s skyline and across the river to Birkenhead. The outward-looking approach and use of natural lighting on the upper floors is in welcome contrast to the numerous museums that keep visitors in the dark and insulated from the city whose story they’re trying to explore.

The story of Liverpool starts on the ground floor with the Global City gallery. Visitors are launched straight into a disjointed narrative about Liverpool's importance to the British Empire, touching on its trade links, its connection with slavery and how its location and global connections shaped the city’s growth and brought it to prominence in the 18th and 19th centuries. This is undoubtedly a social history museum. It’s understandable that curators would want to emphasise Liverpool at its height, but all the same this seems an arbitrary place to begin the story of a city that celebrated its 800th anniversary in 2007 and has archaeological collections that span prehistory to the postmodern age. The first floor History Detectives resource will apparently ‘explore the long history of Liverpool and the Merseyside region from the last ice age to the present day’. It will be interesting to see whether that hands-on space and the yet-unopened exhibitions extend the narrative back in time and make use of collections that don't get an airing anywhere else in NML's family of museums.

The People’s Republic exhibition on the top floor tackles Liverpool's 20th century social history. It doesn't shy away from some of the grimmer Liverpool facts - that it is still one of the poorest cities in Europe, for example, or that death from coronary heart disease is 53% higher in Liverpool than the national average - but there's little explanation or context for why life in Liverpool has frequently been so hard. The museum avoids the traditional narrative of post-industrial, post-1960s decline but doesn't replace it with anything, leaving it difficult to construct an overarching story from the individually interesting displays. Some stories are omitted because they're effectively told elsewhere - the nearby International Museum of Slavery addresses the legacy of the slave trade and its impact on race relations in Liverpool - but this leaves the city story with conspicuous gaps. However, with two galleries yet to open, it's difficult to draw any conclusions yet about the cohesiveness of the museum's narrative approach.

The more upbeat Wondrous Place gallery explores Liverpool's character and popular culture. There are no surprises here, but characteristics such as the Liverpool accent, the city's musical heritage, its poets and playwrights and its sporting traditions are celebrated through engaging individual and personal narratives, with plenty of input from local people and multiple voices accessible through objects, text, film and audio displays. The museum has made much of its community consultation and co-production and says that 10,000 people contributed to the displays. This is a laudable achievement and in some areas results in genuinely illuminating stories - the Global City gallery's exhibition on Liverpool's relationship with China and its legacy in the form of the UK's oldest Chinese community is one example. In other areas the city lives up to its own stereotype. In a section entitled the "Liverpool Look" a local artist asked Liverpool women to design an outfit for a doll that they might wear themselves. The outcome is a slightly creepy display of Barbie and Bratz dolls wearing ugg boots and clutching miniature Cricket shopping bags, as though the women of Liverpool have colluded in caricaturing themselves. Leaving aside the limitations of asking women to represent themselves with toy dolls, it seems a shame to restrict this project to women, all the more incongruous on a day when the city's Gay Pride celebration was in full swing outside. The resulting display says little about how women use clothing to express themselves, or how their individual identities relate to their sense of belonging to the city in which they live.

The museum takes an interactive approach to storytelling, with objects, interpretive panels, touchscreen and physical interactives, flipbooks and short films making for a lively mix and a multi-layered approach to interpretation. The broad range of media and range of approaches to storytelling prompted Observer reviewer Rowan Moore to describe the galleries as ‘a warm gloop of unchallenging information’, which begs the question, what level of challenge did Moore expect? I suspect he’s seeing accessible, audience-focused interpretation and making that tedious and tired assumption that the museum is somehow “dumbing down”. You won’t get a greater level of challenge in the V&A, Rowan, you’ll just find the labels are harder to read. Having said that, while the quality of the build and the production values are second to none, overall there's nothing groundbreaking about the design or content of the exhibitions. Text panels are informative, but wordy and often bland. Displays are object-rich, sometimes to the extent that the collections are hard to take in. The curatorial team has obviously made some tough decisions and crammed as much as possible into limited space, with the result that circulation space in the exhibitions would be inadequate for far fewer people. In some ways the museum is a victim of its own success: overcrowding meant that the touchscreen computers and interactive exhibits were largely being ignored.

Of course the real test of a museum is not whether critics and reviewers like it, but the response it gets from the public. On the day I visited, despite the numbers, there was a buzz in the air and plenty of discussion taking place between visitors: lots of “Have you seen this?” and “Do you remember that?” from the predominantly local crowd. Visitors seemed to recognize themselves in much of the interpretation and many clearly enjoy having their city reflected back to them, particularly on the upper floors. The museum is being billed as a ‘living biography of the city’, emphatically for, about and by the people of Liverpool. 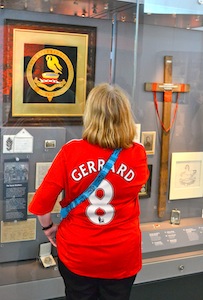 This, however, is the central question, for a museum geek at least. No other city in the country has a city museum with a local remit that receives national level funding directly from DCMS (the Museum of London is funded by the city, and the national museums in Bradford, York and Leeds are offshoots of the London-based Science Museum and do not restrict themselves to local themes).  I can't say I discerned any real difference in ambition, scope or scale between the Museum of Liverpool and other major city museums, for example Leeds, Sheffield or Birmingham; at least, nothing beyond what you might expect from several years of work and a budget of £72m. National Museums Liverpool has created an excellent example of a modern city museum built on a long-term programme of community engagement. Then again, as a national organisation aspiring to leadership of the sector, so it should.